EDITOR’S NOTE: This entry was originally published in November of 2015.  But I was recently inspired to re-visit this topic.  Here we go: 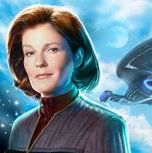 I have to go with my favorite Captain.  I think Janeway has the drive & determination that a good leader needs.  And she’s not afraid to get her hands dirty and be a part of the team– as well as lead it.  She also comes with a great deal of experience.  This isn’t the “just took command of the Voyager” version of Janeway.  Rather  Admiral Janeway survived the year of hell, beat the Borg, and she found coffee in that nebula!

You can’t go wrong with everyone’s favorite android!  Data can easily manage all the duties of the running a starship as the XO and problem solve any situation in nanoseconds.  I think he pairs well with Janeway’s scientific style.  Also, he looks great in red. 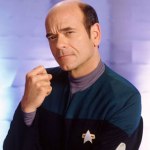 Much like Data, the Doctor is a walking encyclopedia of knowledge.  No other doctor can compare to him- period.  Not to mention he was the most interesting character on Voyager. 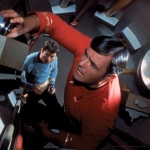 He was flying Starships when your grandfather was in diapers!  He wrote the book and then threw it out the window!  Scotty is the one and only miracle worker. 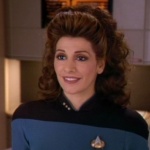 I just love her and her obsession with chocolate.  Plus her empathic abilities come in handy more often than not.  I want to clarify, however, that is Troi AFTER she puts on a real uniform!

Uhura is highly intelligent, speaks multiple languages and is a skilled technician.   24th century starships may no longer have Communication officers on the bridge but Uhura’s muli-tasking abilities will make her a great Operations officer. 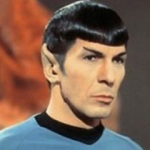 No one is more dedicated to science than Mr. Spock.  He has a innate curiosity for anything he finds “fascinating” and I think would be a great asset to any scientific mission. Plus he’s just a great character.

Odo is Star Trek’s greatest detective.  He will not only keep the crew safe but has the kind of  “street smarts” that will keep any away team a step ahead of the game.

I like the idea of separating Tactical from Security.  They are really two different departments.  I think our ship has a much better chance of survival with Worf manning the weapons console.

Sulu is an amazing helmsman.  And As Kirk said in TWOK: “I for one am glad to have you at the helm… I don’t think these kids can steer.”  Specifically I’ve selected the Kelvin Timeline version of Sulu.  As much as I love George Takei, as a gay Trekker I have to go with the version of Sulu who we know is out & proud.  #Hero

This isn’t the mature wise diplomat version of Picard.  This is the young head strong Ensign who took matters into his own hands when his friends were being cheated.  He won the Starfleet marathon as a freshman and is an accomplished wrestler.

As a traveler he won’t be on the ship full time but will pop in and out.  A little Wesley goes a long way, but he was one my favorite characters when I was a kid. I related to him and even envied him. And hey, he can phase out of our dimension and make the ship go really fast.  That’ll come in handy some day! 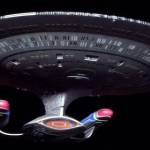 Bottom line: the best ship in the fleet!  I love Andy Probert’s design and the Sternbach blueprints.  This ship is so well thought out and is the most impressive vessel in Star Trek imho.

This entry was posted in Star Trek and tagged Star Trek. Bookmark the permalink.